The Sanskrit Alphabet and Kalii 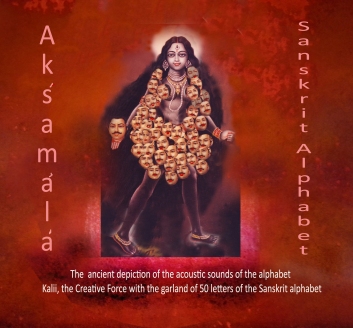 The Sam’skrta alphabet was developed during Shiva’s time around 7000 years ago. The people understood that the primordial creative force (Shakti or Kalii of Shiva) was instrumental for the Cosmic sound  AUM – composed of  ‘a’ – Creation (Brahma’), ’u’ – preservation (Vis’nu) and ‘m’ – destruction (Maheshvara). The AUM is the collective sound of all sounds in the universe. It contains 50 acoustic sounds that became the Sam’skrta alphabet. Since there was no script yet, the people expressed these letters by drawing 50 faces, each sound coming out of the mouth of one face.  They depicted the primordial Shakti as dark coloured goddess (without clothes) in the dark unexpressed state of creation. In her hand was the first letter ‘a’ of the akśamálá (alphabet) and the 49 letters were a garland around her neck.

Later between 2500 and 1600 years ago idol worship was in vogue  and the idea of the primordial Shakti came to be worshipped as the idol Kalii or Shyama or Durga with a garland of skulls  around her neck. Usually the idol Kalii’s has less than 49 skulls because the artists not knowing the original meaning of the skulls.

<<In the age of Shiva Tantra many káliká shaktis [deities] were accepted, but there was no idol worship. Then followed the age of Shivottara [Post-Shiva] Tantra, during the Buddhist and Jain period. During that period, various systems were introduced for worshiping different gods and goddesses in the form of idols; and the metamorphosed Post-Shiva Tantra that came subsequently (largely influenced by Buddhism and Jainism) continued to promote the worship of the deities of Post-Shiva Tantra, but now introduced their worship in the form of idols as well.>>

The frightful image and out-stretched tongue of the idol Kalii is related to a story:  Shiva’s wife Kalii had a daughter called Bhaeravii.  Shiva used to take Bhaeravii and Bhaerava his son from Parvatii out into the dark to have them practice meditation. Kalii as a mother got worried and went out to make sure Bhaeravii was safe.  In the dark she stumbled over Shiva in meditation and stuck out her tongue in fright and embarrassment.

<<A kind of mixed Tantra was evolved out of three different spiritual texts: the Puranas, the Tantras, and the Atharvaveda. In this mixed Tantra, the akśamálá was held by a Tantric deity known as Bhadrakálii (who is not the four-armed goddess depicted in mythology). When idol worship first started, human beings had not yet learned how to write or recognize the letters of the alphabet. To symbolize those fifty sounds, therefore, a garland of fifty human heads was placed around the neck of the effigy of Goddess Kálii, as it is the human mouth which utters words. The acoustic root of creation is ‘a’ the acoustic root of preservation is ‘u’ and the acoustic root of destruction is ‘ma’. So ‘a’, being the acoustic root of creation, was made the first letter. That is why the deity Bhadrakálii holds the first letter ‘a’ in her hand while the remaining 49 letters, from á to kśa, are suspended from her neck. Of course, in the idols made nowadays, just fifteen to twenty faces are placed in the garland. The artists who make these effigies today are not aware of the philosophical significance, nor are the worshipers.>>

<<The word akśa has two letters, a and kśa. From a to kśa, in the Nagari system of letters, there are fifty letters. These letters are the acoustic roots of the fifty propensities through which human beings function. The different sounds are only a mixture and combination in varying degrees of these acoustic vibrations. So in other words, akśa represents the whole set of the vibrations; that is, the creation. Since we see this creation with our eyes, the eye in Sanskrit is called akśi. The pronunciation of this word as per the Tantric and the [Yajurvedic] system would be akkhi.>>

1 Response to The Sanskrit Alphabet and Kalii